DocMob is a film practice all about making super short documentary portraits using cell phones or any digital equipment.  The idea? a) witness small local stories or events b) grab a few key shots c) make an interview d) edit a short-short portrait of a person, organization or project. A Doc.mob film can be a one-person intimate portrait, or the story of an event, an idea, or an innovation project.

The Doc.Mob Manifesto is inspiring (and FREE.) 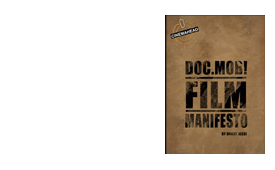 In 2011 Doc.Mob short films, made at KAU University in Karlstad, Sweden, were assembled into a feature entitled “Värmland Stories”. The film, which premiered on December, follows the Cinemahead principle called ‘Fishtankable’. You can see a little teaser about the concept and the film here: